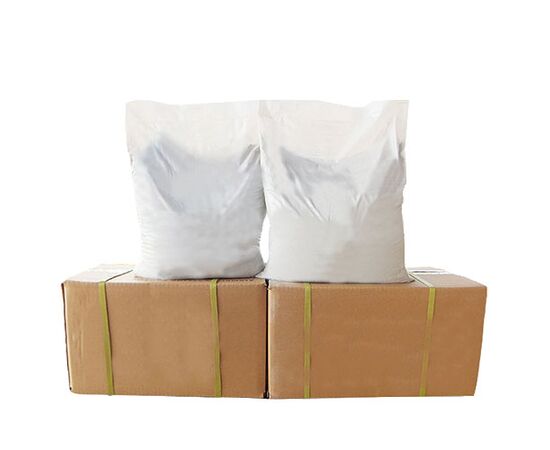 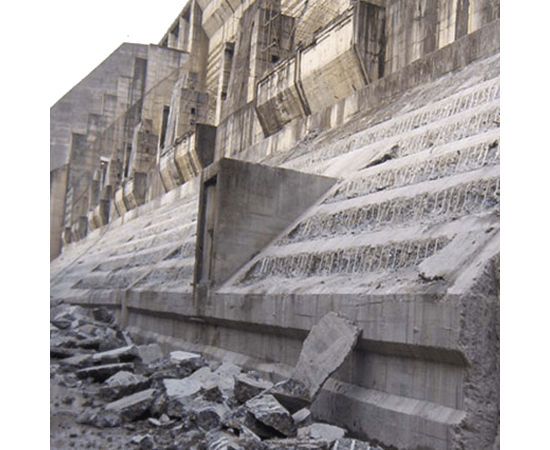 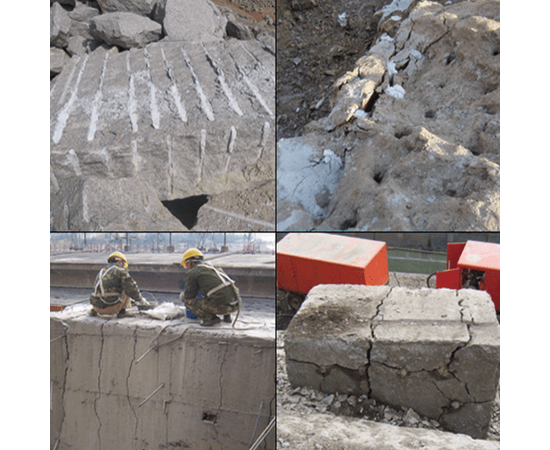 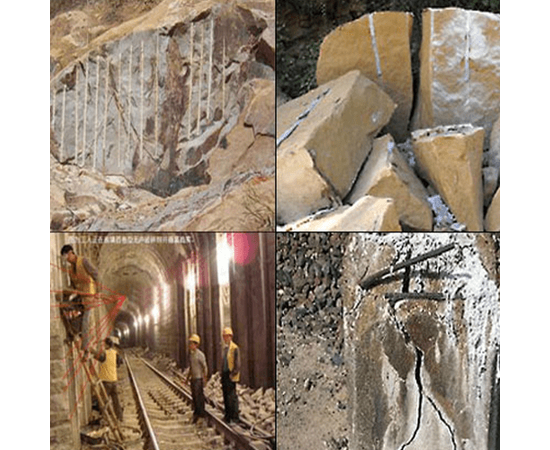 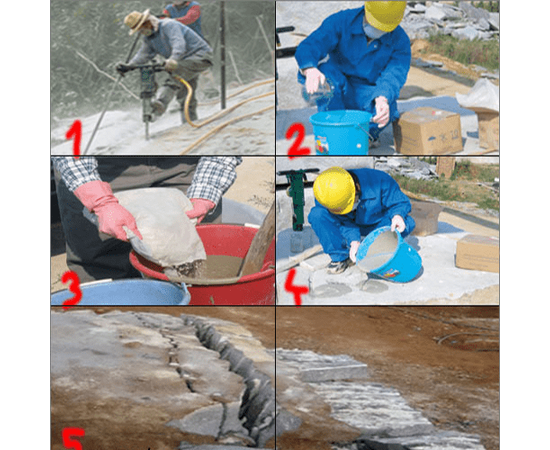 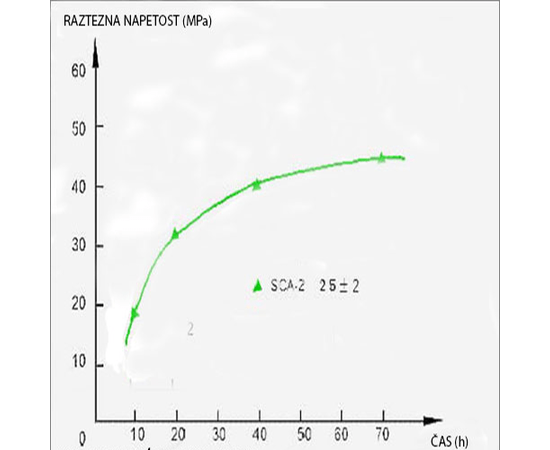 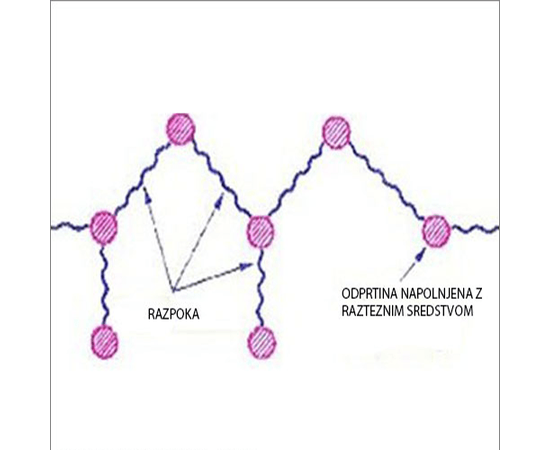 A non-explosive expansion demolition agent is a powdery substance that, when mixed with water and poured into pre-drilled holes, causes the demolition (expansion) of stone, living rock, concrete, or reinforced concrete by its expansion. It is also used for quarrying marble and granite in quarries, digging canals and shafts in rock for water supply networks, and other installations, excavation of tunnels, demolition of foundations, leveling of road cuts, in mines, inside buildings, railway and road infrastructure, where classically blasting is not allowed due to excessive vibrations (vibrations) and when destroying the remains of demolished buildings after blasting. Underwater use is also possible. The demolition agent is tensioned with a force greater than 800 kg / cm2 (80 MP) upon reaction with water in the well. As a result, a similar effect occurs as with conventional explosive blasting (TNT). The stretcher is a substance that is more environmentally friendly, as its action does not cause vibrations, dust, noise or the flight of stray dangerous debris into the air as we are used to in conventional blasting. It also does not pollute the environment as it does not emit dangerous fumes during or before operation, and the substance itself does not constitute a substance harmful to the environment. Due to its simple and non-hazardous operation, the use does not require special permits and control or use of the substance, exclusively by mining-trained personnel.

The powdered substance of the non-explosive expanding agent consists of inorganic mixtures of calcium, silicon, iron and aluminum. The cold blasting agent is enclosed in moisture-resistant boxes with a total weight of 20 kg. The boxes contain 4 plastic bags with a stretching agent. Each of them weighs 5 kg. It is recommended to store the product in a dry environment for up to 1 year. Prolonged storage is not recommended as the product cannot be provided with a humid environment for proper storage.

An electric or pneumatic drill can be used to drill the wells. The size, depth and layout of the wells are arranged according to the type of material, the location of the demolition material, and the desired method of demolition. A non-explosive demolition agent requires the addition of pure water in a ratio of 30% water to the total weight of the powdered expansion agent added. Pour the required amount of clean water (1.5 liters of water for each 5 kg bag of expansion medium) into the container, then carefully add the powder and mix until the mixture becomes smooth and lump-free, similar to a thin mortar. The mortar must be poured into the holes within five to ten minutes, otherwise it becomes poorly liquid. Pouring into vertical and dry holes (holes) is easy. Problems can arise when wells are not completely dry and contain water. As a result, mortar may spill out of the well, which is prevented by covering the hole with a soft sponge and not with an object that would completely clog the hole. In case of rain, cover the wells with a waterproof coating. After pouring into the hole, the expansion medium breaks the rock or concrete in two to eight hours. The rate of demolition depends on the hardness of the rock, or. concrete and from the temperature of the environment in which it operates.

After pouring a non-explosive demolition agent into boreholes into stone or concrete, the expansion pressure increases sharply in relation to the elapsed time. After five hours at room temperature, it reaches a tensile (expansion) pressure of 50 MPa, which is equivalent to a pressure of 6000 tons per square meter. During the formation of the pressure of the non-explosive expanding agent, small cracks appear on the material intended for demolition. After the extra time has elapsed, these cracks coalesce into longer hairy cracks that coalesce according to the direction of successively drilled holes. With the appropriate sequential drilling, depth and slope of the wells, it is therefore possible to control the direction of fracture. Finally, the hairline cracks widen to a certain few centimeters in width, which distinguishes a non-explosive stretching means from conventional blasting, as rock can be thrown there for several meters. Two to four cracks are usually pulled from a single well, spreading on all sides, towards a free surface where the material can be pushed away.

The expansion agent is a highly alkaline substance, but it is not toxic. After mixing with water, it reaches a level of 13 on the pH scale, which can cause very strong irritation of the mucous membranes and eyes upon contact. In case of skin contact with liquid mortar, rinse the contact area immediately with a large amount of cold water. In case of contact with eyes, rinse immediately with plenty of cold water, but do not rub. Seek medical attention. Protective goggles, rubber protective gloves and a helmet are required for carrying, mixing and casting. In poorly ventilated areas such as tunnels and mines, the use of dust masks is required. After filling the wells with liquid mortar, do not bring your face closer to the wells for at least three hours after the casting is completed. After casting is complete, make sure the site is inadequately secured and prevent accidental visitors or workers from being in the immediate vicinity of the wells.

© 2009 - 2022 TISTO. We make every effort to publish only verified and correct data; if you find untrue or inappropriate information on our site, please let us know at info@tisto.eu. The photos do not guarantee the properties of the products.